Should What Happens in Vegas Stay There?

Companies are collecting our personal data from our vehicles and monetizing it. If it’s my car, isn’t it my data?

What follows might look like a bit of a rant, and I don’t want to appear alarmist, but we are becoming victim to our own data and the sky is falling!  Well maybe not, but still …

As consumers we produce millions (billions?) of points of data every day in countless ways, from our shopping choices, to the online searches we do, to the calls we make on our cell phones.  We create data in other ways too, ways that many ordinary people may not fully appreciate.  When we drive our vehicle, when we have an accident, when we go to a body shop for estimates or repairs, when we make an insurance claim, we are creating data.  Companies are collecting this data and monetizing it on a massive and ever-increasing scale.

I’m not aware of anyone questioning who owns this data.  It seems to be accepted wisdom that the company collecting it owns it, but do they?  If it’s my car, is it not my data?

This is not to say that huge benefits haven’t been realized from the compiling of these data points into organized and useable forms so that I can simply search (for a fee) online using the VIN of a car I want to buy and find out if it might have been in an accident, had an estimate, a police repair or an insurance claim in relation to the damage.  I can find out quite a bit about a vehicle without leaving my desk if I want, and that’s much different than the lay of the land even 20 years ago.  That’s a good thing.

But.  You knew that word was coming, didn’t you?

The first concern here has always been interpretation.  If I search a vehicle and I get a response that says “police reported incident 2013, $0-dollar amount” what am I to make of that?  Is it a “red flag” or a “red herring”?  Am I better informed than when I paid $40 to find this out?  Who explains this mountain of data to me?  In the meantime, I may have so much information I’m paralyzed to act for fear of making the wrong choice, not fear of missing out (FOMO) but fear of messing up (FOMU)!

Data collection science, if I can call it that, does not stand still.  As I mentioned, it has become monetized and as soon as that happens, companies will continuously seek to push the envelope into new uncharted regions; potentially darker areas that should raise concerns for us all.

Recently, word out of Las Vegas, breathlessly reported in automotive news circles, is that Audi announced at a J.D. Power Automotive Marketing conference that in 2019 they will unleash upon the world their first “all digital” vehicle.  Just to share with you what that means, in case I’m not the only one who didn’t know, is that this little gem will send data back to Audi about every aspect of my driving experience. 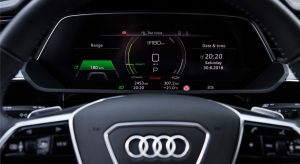 Audi will know virtually every aspect of the vehicle’s function, more than 800 data points every minute … but wait … there’s more!  The car will also “know” and report on my travel destinations, the load weights I carry, the time I spend at various places and so on.  My car will know more about me than I do.  And so will Audi.  Supposedly this data will be used for the noble purpose of creating a better customer experience for me.

And this is viewed and reported on as a wonderful thing, a thing dealers should definitely get in on.  Suppose they do?  Then suppose someone hacks Audi or the dealer and uses the data for evil purposes – who is responsible to me?  Please don’t tell me that can’t happen, we all know it happens more than we care to admit (and even more than we know about I’m sure).

In the race for more and more digital content, data and granular analysis, I wonder if the right questions are being asked.

Aside altogether from prickly questions about who should own and control data created by my vehicle, owned and operated by me, what about other questions of privacy?

If this goes wrong you better believe the blowback will hit the dealer and not just Audi.

Can you imagine the value such data might have to lawyers for insurance companies, separating spouses, and litigants generally, not to mention police, government tax authorities and other regulators?  And these are just the non-criminal, non-totalitarian governmental third parties who would like a piece of the glorious pie that is me and my data.

I don’t want to come across as a party pooper and I’m all for progress, but it seems to me we all need to take a deep breath and try to look at these issues from more than one or two sides.

Just because we can do a thing, does not necessarily mean we should.  Perhaps there is such a thing as too much information?

Have I convinced you yet?

Then consider this latest tidbit out of China, that great bastion of human rights and privacy protection, reported on recently by the Associated Press:

In China, your car could be talking to the government

Automakers selling electric vehicles in China send a constant feed of information about the location of cars to the government, potentially adding to the rich kit of surveillance tools available to the regime as President Xi Jinping steps up the use of technology to track Chinese citizens.

Automakers say they are merely complying with local laws, which apply only to alternative energy vehicles. Chinese officials say the data is used for analytics to improve public safety, facilitate industrial development and infrastructure planning, and to prevent fraud in subsidy programs.

But critics say the information collected exceeds those goals and could be used to undermine foreign carmakers’ competitive position, or for surveillance. Under Xi’s leadership, China has unleashed a war on dissent, marshalling big data and artificial intelligence to create a more perfect kind of policing that can quickly neutralize perceived threats to the stability of the ruling Communist Party.